The Most Dangerous Intersections in Columbia and Richland County for 2016 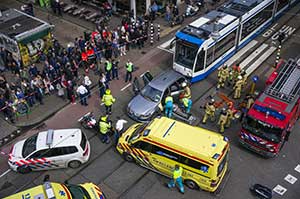 There can be many reasons why an intersection in the Columbia area is dangerous. The primary one is volume. The more drivers there are at an intersection, the more likely a bad driver will pass through; and with more vehicles filling a space, a collision is simply more likely. You can also add poor design, especially if it encourages high speed or sets up circumstances where drivers trying to go in different directions conflict.

Broad River Road and Interstate 20 had the highest number of accidents in the county last year, with 142 causing 26 injuries, reports The State newspaper. Its reporters reviewed Columbia Police Department and South Carolina Highway Patrol records to come up with the figures. Assembly Street and Elmwood Avenue was the worst intersection in Columbia, with 50 crashes. For those of us living in the area, these numbers shouldn’t be a surprise.

As for the interstate, traffic to the northwest and northeast of Columbia is the busiest and fastest and causes the most problems. After I-20 and Broad River Road, the most dangerous intersections are:

As traffic volume increases, so does the risk of an accident. A majority of collisions happen during the morning and evening commutes for the top three listed intersections. Malfunction Junction has more than 133,000 vehicles on it each day. About 1,200 vehicles per hour use Broad River Road to enter I-26 during the morning rush, according to a 2016 study by the state Department of Transportation.

Troopers blame many accidents on inattentive or distracted drivers, those travelling too fast and drivers who follow other vehicles too closely. One trooper reported that victims of rear-end accidents often claim to look behind them after a crash to see the other driver looking down, possibly at a smart phone. Other problems are drivers running red lights and not maintaining their lane while turning. Pedestrians are also struck while crossing streets.

There were 18 traffic fatalities in Columbia last year. By the end of May there were three. The city’s most dangerous intersections are: